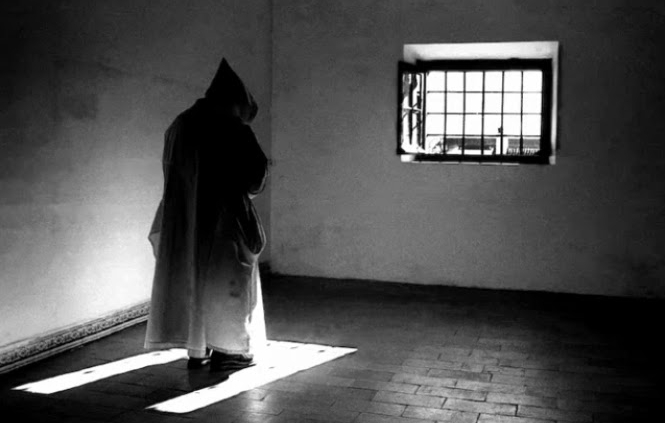 Excerpts from The Monk’s Cell Chapter 8:

The Porous Self: Community and Intersubjectivity from the Inner Room

This is the eighth and final post from an 8-week cycle drawing excerpts from my book, The Monk’s Cell: Ritual and Knowledge in American Contemplative Christianity (Oxford University Press, 2018). Gratitude to all at The Contemplative Society for inviting me to participate.

The eighth chapter, Cell, is a narrative of the illness and death of Helen Eberle Daly, one who was dear to many of us in the Wisdom community. Beginning with our pilgrimage together to Assisi, Helen’s story beautifully illustrates how solitude and silence are profoundly communicative acts, and how devoted practitioners have the potential to courageously work towards contemplative maturity regardless of life’s jagged edges.

That first afternoon, Helen and I walked out of the towering eastern gate of the medieval walled town of Assisi and headed toward San Damiano. I was sketchy about the story of Francis, but this much I knew: San Damiano was the little church that Francis had rebuilt from ruins when he first felt the call to a religious life. The story goes that in the rubble of a chapel ruin that was ancient in his own time, Francis was praying before the dilapidated altar when the crucifix hanging above said to him, “Repair my house.” Francis took the imperative literally and restored San Damiano stone by stone, then later turned it into a convent for Clare and the women who followed her.

The cobbled path took Helen and me down a hillside covered in gnarled olive trees. Some were so old that their trunks were nothing more than perforated husks barely capable of supporting their leathery silver-green leaves, so old that some might have been there when Francis himself walked that road 800 years ago. We passed a few trinket stalls, modest stone farmhouses with hand-lettered signs advertising “Olio di oliva in vendita,” a fourteenth-century iron-gated shrine displaying its candlelit fresco of the Madonna and Child, and shiny outdoor escalators rising from a sizable parking lot for some of the many air-conditioned coaches that brought tourists and pilgrims to Assisi every day.

During the forty-minute walk, Helen stopped several times. Her back was really bothering her, she said, probably due to the many hours of wandering around Rome for three days when they first arrived in Italy, after being relatively inactive at home in Vermont during a particularly harsh winter.

Notices requesting “Silenzio per favore— tenere in riverenza” told us we were getting closer. San Damiano appeared around the bend of a curving monastery wall and a line of cypress trees. It was tiny and simple, with a finely worked rose window, terracotta roof tiles, sheltering cloister arches, and a small stone piazza with banks of votive candles. Two bronze statues depicted Francis, one walking barefoot with staff in hand toward the church’s portico and another meditating cross-legged on the hillcrest before an expansive view of the rural landscape below. How different from the magnificent thirteenth-century basilica, adorned by the likes of Giotto, Cimabue, and Martini, that was built later on the other side of town in reverence for (and also in spite of) Francis’s simplicity and radical poverty.

Threading our way through a scrum of photo-snapping visitors and past a young black-bearded friar who was sweeping the outer courtyard’s stone pavements, we entered through a side chapel, which featured a gruesome, life-sized Baroque crucifix, then made our way into the nave of San Damiano proper. Helen and I stopped in our tracks: the sanctuary’s low plaster vault was so organically irregular, the dusky filtered light so pensive, the early medieval starry-night frescoes so intimately drawn, the rickety wooden choir stalls so clearly made by the hands of those who used them centuries ago. The floor tiles were worn glossy from the thousands upon thousands who had stepped through, and the plaster walls were seasoned with the touch of so many who had remained there in prayer. Above the diminutive altar was the painted, iconic Syrian-Christian crucifix that people all around the world, including those in my research, hold in special reverence.

It seemed more than the evocative minimalist charm of early medieval Umbrian aesthetics that moved Helen and me, however. Wide-eyed, I turned to my companion to find her in tears. She was also shaking, then I realized the same was true of me. We stood at length in the middle of the chapel with people moving all around us until we finally eased our way through the throng to a place in the narrow wooden pews. A few of the visitors stayed in the chapel, but more surged by in a steady stream, first looking about, then heading on past the altar for a self-guided tour of the cloister where Clare and her adherents once lived. Meanwhile, my entire body shook, not a little but rather violently. I felt as though I were on fire. I placed my hands and forehead against the cool plaster wall to try to steady myself. This was rather unexpected.

We stayed there a long time, but finally got our bearings. Moving out of the chapel toward Saint Clare’s cloister, I felt some return of composure. We stepped through the nuns’ private brightly frescoed choir, where they would have performed their daily offices and received communion, and climbed narrow, turning stairs to an upper dormitory cell with low slanted ceilings and a wall of arched windows opening onto an enclosed courtyard below. There, sunny geranium-filled balconies had a settling effect on me. But Helen responded differently. One corner of the dormitory was cordoned off with silk rope. On the floor was a ceramic hand-painted plaque telling us that this was the place of Chiara’s (Clare’s) death. Helen’s breath caught. She stopped and knelt there, gazing with bowed head and parted lips.

A group of Bolivian nuns came through, led by a priest who gave them tidbits of history in Spanish. The breach of silence annoyed me, but Helen told me later how moved she was by their devotion. A few of the nuns rubbed their rosaries over the place where Chiara had died, a gesture of sanctification that I saw many times at sacred sites in Assisi. When the black-habited women had moved on, Helen stretched her torso and arms forward until her forehead touched the ground in the Islamic-style posture of half-prone prostration. I went to sit in the window arch and wondered about the severity of sensation that had overtaken me when we first entered the chapel of San Damiano. It wasn’t as if I had a devotion to Francis, or any other saint, for that matter. I knew very little about them. Below in the enclosed cloister garden, tourists milled about a stone well and flower beds. Helen remained some time in prayer.

Both of us left San Damiano feeling a little shattered. We spoke with astonishment about the strange, visceral, and unexpected response. Helen said she deeply felt the presence of Francis and Clare, but that an especially strong sensation of connectedness came over her in Clare’s cell. “It was like Chiara had her arms around me in sanctuary,” she said. “Something big happened here,” said Helen, looking out at the Umbrian plain. “And it’s still happening.”

For those who are interested in purchasing a copy of The Monk’s Cell, you can receive a 30% discount by ordering online at global.oup.com/academic with promotion code AAFLYG6.

What is the Christian Wisdom Lineage?
Scroll to top