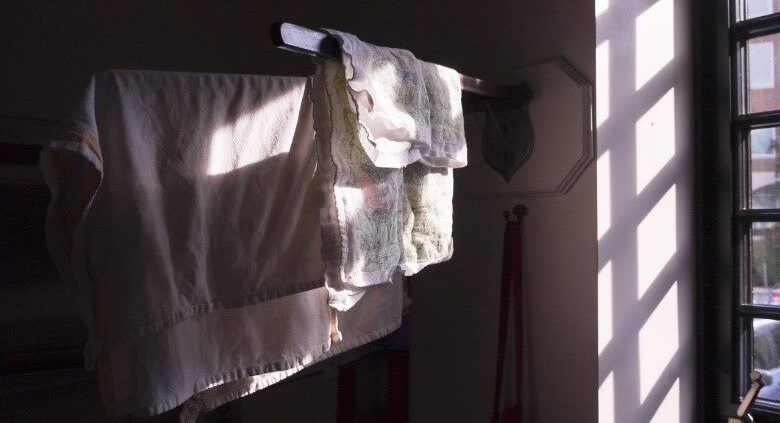 Excerpts from The Monk’s Cell Chapter 6:

Prayer without Ceasing: The Ritualization of Everyday Life

At the House of Prayer Wisdom School in August 2011, Brigid had learned her lessons on keeping attention particularly well. Teachers and students alike recognized her as having an unusual capacity to employ ritualized postures as a way of attuning herself to the ambiguous flow of the divine. After a long day of silent meditation, liturgies, sohbet seminars, and work periods, Brigid sat a little off to the side of the Common Room’s haphazard circle of chairs and sofas during the evening discussion period. A small woman in her forties, Brigid was soft-spoken and gave the impression of being shy. However, when she found an opening in the conversation to convey her experience of kitchen duty, she spoke so deliberately and with such focus that the whole room listened with uniform stillness. Brigid compelled the attention of others by carefully selecting each word, unafraid of lengthy pauses as she sought the right way to relay her observations. There appeared to be a concentration of meaning in each precise word, as though she were reliving the moments she had experienced earlier in the day. Her way of speaking itself seemed to be an act of attention and staying present.

Brigid told us that she had been assigned to kitchen duty for the week’s experimental work periods. That morning Ward Bauman, the retreat house director, had asked her to chop vegetables for a dish to be served at the evening meal. Brigid described the cucumber, the wood grain of the cutting board, the weight and feel of the cleaver, the pressure of hand against knife and the positioning of fingers; she described the intensity of the cucumber’s colors meeting in concentric circles of deep green skin, near-white inner flesh, and translucent innermost seeds: how the blade bit through resisting skin, then sank through the firm but giving inner flesh, its varied densities and leniencies. “Not the green or the white,” she said pausing again and visibly shaking now, eyes bright with the immediacy of her recollection, “but in their meeting place – where they came together – was their place of surrender.”

Brigid sat silently for a few moments but had something more to add. Because of the noisy kitchen bustle at the beginning of the work period, she had been unable to hear exactly how Ward wanted the cucumber to be sliced. Ward had passed by her side-counter station in the middle of the work period, had taken a quick look, and said, “Smaller.” But Brigid had not wanted to cut the pieces smaller. She said, “I’d cut these perfect circles and stacked them three pieces high in perfectly aligned rows at the edge of the cutting board.” Recalling a Sufi poem that praised seeds at the center, she had resisted Ward’s request to cut through the seed circle. Yet Brigid had sliced into them anyway, letting go of the desire to preserve a form that had meaning for her.

As she cut, her board had become wet with cucumber juice and the slices wouldn’t stay put. “The cucumbers were slippery and the pieces went everywhere!” she said. In the midst of ineffectually trying to corral them, she had stopped with sudden realization: “Abundance!” exclaimed Brigid, “a gravitational outpouring of abundance everywhere around us!” She then returned to her measured, concentrated way, saying, “I could see the beauty in the cucumber, but if I had kept to what I knew and what I thought I wanted, I would not have understood the abundance.”

No one made a sound. All motion seemed to have been arrested by the intensity with which Brigid had conveyed her experiments with intentional kitchen work. The way she spoke and the intensity of her listeners’ focus together profoundly changed the atmosphere of the room. Brigid’s ritualized act of deliberate speech seemed to offer a glimpse of the divine that bound the community, even more than the details of her observations. The air itself seemed to shimmer. After a while, Cynthia said in almost a whisper, “Someone’s paying attention, wow.” Helen then glanced over to me and quietly said, “Our very own T.S. Eliot.”

Reflections on Luminous Wisdom with Cynthia Bourgeault
Scroll to top