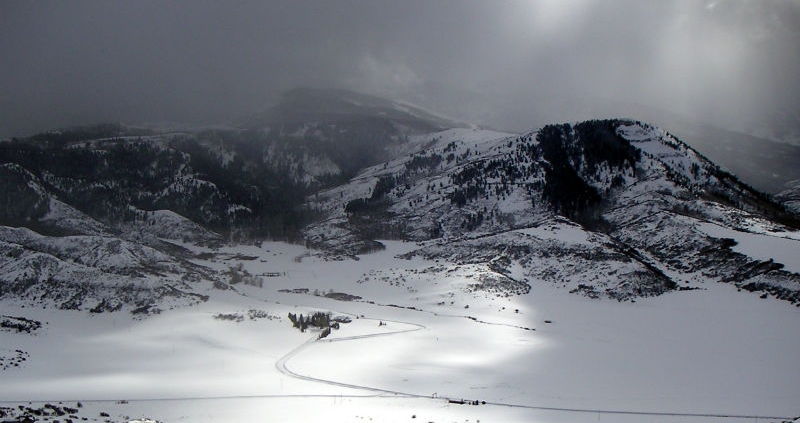 Excerpts from The Monk’s Cell Chapter 3:

Silence and Seclusion: Contemplative Environments of Interiority and Receptivity

Continuing with the series of excerpts from The Monk’s Cell: Ritual and Knowledge in American Contemplative Christianity (Oxford University Press, 2018), the third chapter, Grille, describes the aesthetics of the silence and interiority that help foster a distinctive, intentional way of life, and how that silence paradoxically communicates hospitality, warmth, and community.

Stepping into the frosty air, I gasped. The stars! At this altitude, in this cold, the stars really did have points, five crisp points just like a child’s drawing. Except for the faint starlight, the earth rested silent in deep moonless dark. Periodic flashes from my light helped me keep to the unplowed gravel road. The beams caught the hoary frost, glittering, almost magical, on the sagebrush, grasses, and fence posts.

Entering the austere Trappist chapel, then edging my way to a side bench up against the brick wall, I moved into another variety of silence. It was dark except for a few starry votives at the tabernacle and icons. The monks, in hooded, ivory-colored habits, sat motionless on wooden benches in the antechapel. Their quiet seemed to blossom through space. A “pungent silence,” our retreat leader, Cynthia Bourgeault, had called it on a previous visit. It had a kind of density, not accidental but filled with intention and potency.

With their initiation of the Vigil office, the monks approached the conclusion of that night’s Great Silence. A clock chimed from the cloister walk outside. The monks rose, then the cantor toned, “Lord, open our lips.” The community used their thumbs to make the sign of the cross over their mouths, then chanted in response, “That our mouth shall show forth thy praise.”

The plainsong seemed to greet the silence rather than diminish it. Their words were inward, muted, and perfectly synchronized; the unified sound emerged from them effortlessly. It was not beautiful in the way of a stunning, magnetic performance of an accomplished concert choir, but was arresting in its simplicity and ease and intercorporeality. Their sound inhabited the silence as from a single body.

After the office of Vigils and a lengthy period of meditation, I walked back to the guesthouse. The monks’ intentional silence and sound made the quietude of the valley seem even more apparent. I heard not the slightest rustle in the frozen grasses. These two hours later, the air was colder and the stars had shifted, some constellations having set, others risen. My eyes adjusted to find that the sky had just perceptibly lightened. I could make out the edges of snow banks along the gravel road and discerned the slightly darker mass of mountains against the retreating night. I stopped to listen to the extraordinary lack of sound.

Just then, a lonely call cast itself across the valley from a high ridge. An interlude. Moments later, yips, howls, and yaps came bounding from an opposite hillside. I laughed at their versicle and responsory, cantor and choir Rocky Mountain style. A shooting star burst across the night sky as if in silent appreciation of the coyotes’ early morning office.