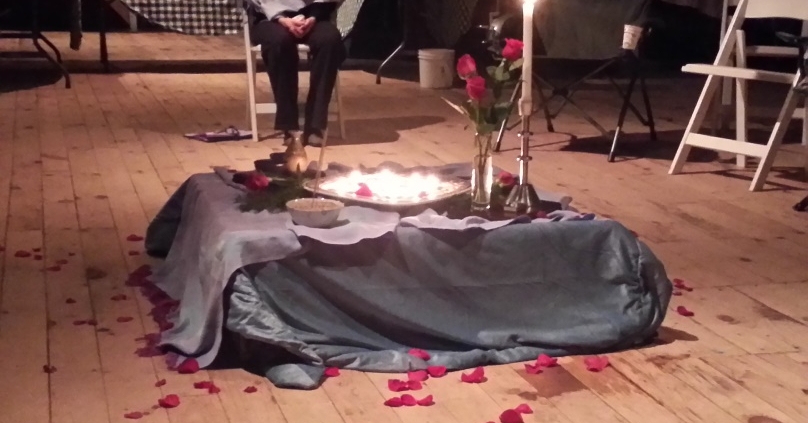 Excerpts from The Monk’s Cell Chapter 4:

Continuing with the series of excerpts from The Monk’s Cell: Ritual and Knowledge in American Contemplative Christianity (Oxford University Press, 2018), the fourth chapter, Gate, describes the charismatic appeal of teachers and diversity within the American contemplative Christianity movement. Exploring the limits of variability in this dynamic, open-minded movement, the chapter compares the distinctive ethos – penitence and eros – of monastic and Wisdom rites for Holy Week.

Apparent in their liturgy for the Wednesday of Holy Week, Wisdom Christianity’s approach to the re-enactment of the events leading to Jesus’ death and resurrection differed significantly from the Society of Saint John the Evangelist’s more standard Tenebrae service. Both described the crucifixion of Jesus as “the Passion of Christ,” but the tones of that passion – eros and despair – had quite different connotations.

These differences were clear in distinct liturgical ‘bookends’ in each group’s rites. SSJE began Holy Week with a ritual diminishment of light in Wednesday’s Tenebrae, the Service of Shadows, and concluded it with increasing light at the Easter Vigil when, in pre-dawn darkness, the monks kindled the sacramental fire from which the great Paschal candle was lit. People then spread the flame from taper to taper until the chapel became a universe of stars. By the time the priest had proclaimed ‘Christ is risen!’ some hours later, every light in the chapel had been turned on and daylight of the newly risen sun streamed through the clerestory windows. The entire three-day Triduum was thus ritually bracketed with Wednesday’s light to darkness and the Easter Vigil’s darkness to light. The light and darkness symbolized the people’s journey through Holy Week as a passage of cosmic scale, in some way well beyond the imaginings and experience of ordinary human beings, despite the centrality of its very human story of betrayal and death.

While the Wisdom community also included this ancient ‘light out of darkness’ rite with the lighting of the sacred fire and Paschal candle at the Easter Vigil, Cynthia Bourgeault, Ward Bauman, and Darlene Franz emphasized another kind of ritual bookending. The Anointing Ceremony on Wednesday in Holy Week was paired with Easter morning’s gospel story of Mary Magdalene and another woman approaching the tomb to anoint Jesus’ body. These ritual brackets are not the meaningful yet impersonal cosmic symbols of light and darkness, but the personal and intimate actions of sacramental touch at the hand of a devoted disciple, ritualized as gestures of cosmic significance. Focusing on alternative historical references (the scriptural accounts of loyal women anointing Jesus as well as anointing rites in general), the Wisdom liturgists hoped to reframe the Easter story from one of abandonment and betrayal to one of stalwart, attentive, and fearless passion. By highlighting different historical passages and using standard liturgical elements like sacred drama, anointing, and chanting in alternative ways, Cynthia Bourgeault hoped to shift ‘the emotional epicenter of Holy Week from blame and guilt to freely offered transfiguring love.’

Thus, while American contemplative Christianity had strong unifying points, the movement also had internal diversity. With their ‘orthodox’ tone, monasteries had the advantage of implicit authenticity in the weighty imagery of a substantial historical lineage, despite the reality of periodic stability, rupture, and renewal that has brought contemporary monastic communities into being. More overtly innovative, Christian Wisdom teachers like Cynthia Bourgeault worked at the grassroots level to encourage their versions of history by writing books, teaching online, and offering workshops, retreats, and Wisdom Schools all over the United States and abroad. One long-time practitioner of contemplative Christianity in my research marveled at how their determined efforts, practical skill, and ‘phenomenal knowledge’ had ‘sown seeds all over the place to get the Wisdom network to grow and flourish.’”