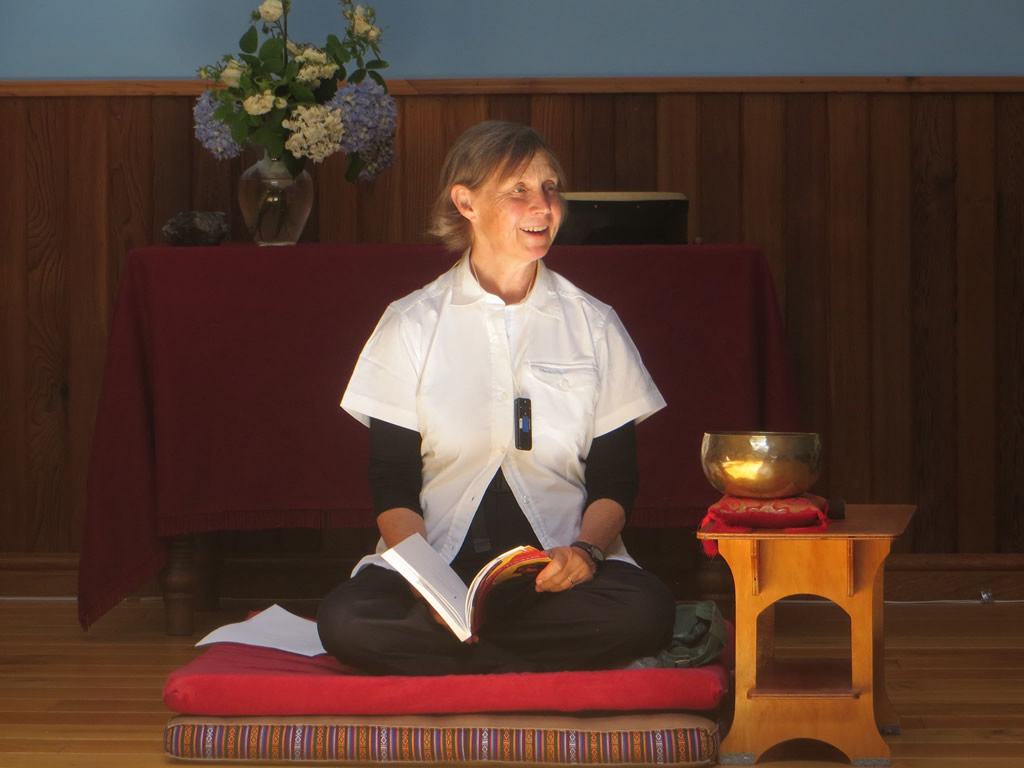 From my running “missing bag” saga, some of you may have gotten the impression that my recent teaching adventure in Scotland and Ireland was a bit arduous. Not in the least! It was in fact it was one of the most stunning high points of my entire teaching career, if not of my entire life. The missing bag was merely the “outer and visible sign” of the inner baggage simultaneously dropping away. I felt free, clear, “home,” supported, and supremely on my native soul ground in a way I haven’t felt for decades. Maybe even lifetimes.

The location didn’t hurt, for sure. Holy Isle is a tiny, mountainous scrap of island just off the eastern shore of Arran Island, the southernmost of the Scottish Hebrides. Originally home to Christian hermits, it was bought about a decade ago by a group of Tibetan Buddhists under the leadership of Lama Yeshe, who have taken pains to restore and rededicate it as a sanctuary of healing for the entire world. The island is home to an enclosed women’s three-year retreat for Buddhist adepts, a picturesque retreat center housed in an old Scottish farmhouse, a small group of volunteers who tend the center’s magnificent organic gardens, and several species of wild ponies and sheep that roam freely in their restored natural habitat.  A tiny ferry (way smaller than an average lobster boat!) brings retreatants and day-trippers across the half-mile stretch of bay several times a day.

Holy Isle is seriously committed to maintaining a very pure energy bandwidth—clearly on behalf of the entire planet. The diet is completely vegetarian, and alcohol in any form is strictly forbidden—even communion wine. Visitors to the island agree to abide by five covenants which include no killing (even of pesky insects), no stealing, no use of intoxicants, and no abusive sex (one reads between the lines that celibacy is the preferred state here.) While that sounds like a lot of “no’s,” it’s a far cry from the grim temperance of our Protestant forbears. Holy Isle is deliberately trying to hold a certain vibration, and once you see how marvelously easier it makes spiritual work, it’s a pretty much a no-brainer to get onboard with the program.

Clearly, it was the ideal place for a Wisdom School. Almost overnight our pilot UK Wisdom School, sixty folks strong, coalesced into a powerful synergistic unit, thinking and meditating and working at a level far beyond anything I’ve ever experienced in an introductory school. The chanting was magnificent, the practical work sparkling and focused—and the five days of perfect weather didn’t hurt a bit! In their down times, people wandered the shores or attempted the high, spiny trail over the ridge of the mountain.

They liked us there, too! The staff was more than a little impressed with the depth of the mindful attention we were able to bring to the work periods, and it was a real blessing when several of them began to join us for teaching and meditation sessions. By the end, it felt like we were all working together—Christians, Buddhists, and “spiritual but not religious”—at this extraordinary vibrational bandwidth to build something of tangible importance for the world. It was more than just the usual personal learning experience. Something else was moving through it which awed and humbled us all.

So of course, we’ll be going back next year. Details to follow…

We finally broke camp on the 3rd of July, just as the rains began to fall, and on a thoroughly soggy Fourth of July I found myself on a plane bound from Glasgow to Dublin, where I would be leading a weekend retreat for New Monasticisms Ireland called “In the Wake of Saint Brendan”— followed by two days of a personally conducted sightseeing tour through the Brendan sites of Kerry County.

As many of you know, I’ve had a “thing” for Saint Brendan for well over thirty years, manifesting itself in a couple of scholarly articles plus an original “mystery play” which in fact premiered in 1996 in the birthplace of The Contemplative Society, All Saints Anglican Parish on Salt Spring Island, British Columbia! But while the story of Brendan’s legendary voyage to “The Land Promised to the Saints” was deeply etched in my heart, I had never actually set foot on the lands he sailed from.

Accompanying me on this pilgrimage was Sr. Bernadette Purcell, as well as our host for the trip was Fr. Tomas O’Keeffe, a County Kerry native and fluent Gaelic speaker, who shared my passion for St. Brendan and was at that very moment completing his doctoral dissertation on this redoubtable seafaring saint. With an extensive network of local connections, a historian’s proclivity, and a priest’s entrée, he was a godsend, literally, opening doors that most tourists would not even know existed. As we traveled around the various little peninsulas of County Kerry that stretch out like long bony fingers into the Atlantic, he kept us regaled with Celtic cd’s and a bottomless well of stories and hospitality.

“If the weather cooperates ….we’ll attempt the trip to Skellig Michael.” A big “if” indeed! Skellig Michael, a craggy rock sitting eight miles out in the open Atlantic, is basically the Mecca of the Irish hermit movement. For about five centuries, from the 6th to the 11th, it hosted a colony of fiercely determined monastics who must have been near as craggy as the rock itself. Six hundred steps up (each one lugged or hand-hewn into the rock), they’d constructed a tiny cluster of beehive cells which served as the staging post for their frontal assault on heaven. The place is such a stunning achievement of the human spirit that it’s been preserved as a UNESCO world heritage site. A small fleet of fishing boats ferry intrepid daytrippers out to the site from the tiny village of Portmagee, the closest mainland landfall.

The big “if,” it turns out, is contributed not so much by the wind and weather as by the direction of the sea swell. What passes for a landing site on the Skellig is a tiny opening in the mighty cliff walls, due open to the southeast. Wind coming from that direction will create a mighty wave that essentially smashes the tiny seacraft right onto the rocks. For five days before our scheduled passage, the winds were southerly and the boats stayed in port. On the sixth day, we woke to rain squalls and the winds still firmly southeast. Fr Tom called the boatman only to report, sadly, “no landing.”

July 8, our last shot, before my return flight to the States, dawned stormy and turbulent, but the wind had shifted to northwest. The classic “clearing nor’wester,” familiar to me from decades on the main coast: winds whipping, air bracingly clear, seas that gorgeous deep blue green, whipped with seaspray. Not exactly a comfortable day to be headed out to sea, but at least a do-able one, and the little fleet of seasoned boatmen, raring to go after six days of lost income, seemed totally unphased about ferrying boatloads of landlubbers out to a craggy rock in the middle of the ocean in what soon built to 25-knot winds. I knew enough about sea conditions to know full well what we were in for—a wild, wet ride! Thank heavens, among the treasures cached away in my now recovered bag were my rainboots and foul weather gear.

The passage took a very dicey hour. The other folks sharing our party, an Italian family on their holidays, all got seasick.  But our captain, who I’d guess had roughly six decades of nautical experience under his belt, guided us deftly to our destination, dumped us off at the small concrete landing, issued the usual warnings about not falling off the island (!!!), and ordered us to be back at the landing and ready to board by 1:30.

If you’re plagued by acrophobia, definitely cross Skellig Michael off your bucket list! This place is not for the faint of heart or careless of footstep. Our captain’s warning was no exaggeration: every year or so a few hapless tourists manage to plunge to their death from this medieval “staircase to heaven,” unprotected by guardrails (they’ve been considered periodically, but always the conclusion is that such modern compensations would wreck the character of the island.) To survive here—then as now—you have to give yourself entirely to the immediacy of the environment and live with that exhilarating, “gun-to-the-head” kind of alertness. Fully alive, fully aware of the dangers, fully knowing you can die at any moment: all in all, a great way to intensify a life of prayer!

The two hours of our allotted visit passed swiftly. I tried out a couple of the beehive huts and wondered if I could see myself living here (I decided it’s a bit craggy for my version of hermiting, but I could definitely see Rafe settling right in here “for the duration.”)  We tried out singing some Celtic ballads and a few strains of Samuel Barber’s “Hermit Songs” in the resonant beehive huts. Not much chance to meditate—too many tourists, too little time—but Fr. Tomas promised me, with an Irish twinkle in his eye, that when I come back again next time—well, he knows the Skellig guides pretty well, and he can probably arrange for me to spend an overnight here.

The voyage out to Skellig was magical, exhilarating, and the unexpected realization of a dream that’s enthralled my soul for decades. It was like suddenly setting foot on the place that had furnished the “root of the root” of my hermit archetype.. And yet, if truth be told, I’d  have to say that the absolutely most magical part of the whole day (if not the whole trip!) was the boat trip back. As we hastily piled back aboard our little sea charger, it was clear that the winds and seas had built still more; I’d say we were now at a good 30 knots, with wild rolling seas directly abeam and towering waves. Again I donned my complete foulweather outfit and sat myself down flat on floor of the boat. Nothing to do but trust our captain as he expertly galloped his steed from wave crest to wave crest, spray flying, waves dancing, a glimpse of headlands here and there, all dissolving into a great buzzing, blooming dance of life itself.

To all who had a hand in making this magnificent experience a reality for me, thank you from the bottom of my heart.  And it did the trick. I think the Irish in me is finally waking up! One way or another, I suspect these magical lands, and their even more magical people, will be a part of this next chapter of my life.

More Discernment on the Four Voices