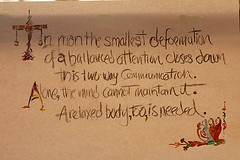 The Flowingness of Attention – A Wisdom School Report by Cynthia Bourgeault

Two weeks before our long-awaited Calgary Wisdom School last April, Mother Nature surprised us with a challenging gift: two feet of heavy, thick Alberta snow! That wiped out the major portion of the anticipated chore-list for our daily hour of practical work. Forget the raking team, garden beds team, and painting team! But what, pray tell, does one do with the dozen or so people who would have been assigned to these tasks? As any one who’s been to Wisdom School knows, that hour of practical work is perhaps the most distinctive component of the Wisdom School curriculum, and foregoing it was not an option. But what could serve as an option for redeployment?

The solution to this dilemma came from Susan Cooper and Betsy Young, the twin pillars of our Calgary Wisdom circle. Having participated in many Wisdom Schools all over North America, Susan and Betsy are experienced hands at how the practical work quadrant of the Benedictine Wisdom template is supposed to function, and two of the most creative and “third-force-conducive” minds I’ve ever met. Susan immediately came up wit the idea of a “Scriptorium”—the hand-copying of sacred texts, for which the Benedictine tradition has long been noted.  If the Benedictine monks oft St. John’s Abbey in Collegeville, Minnesota, are even now attracting note worldwide for commissioning the first hand-copied Bible in more than five hundred years, might not our own humble little Wisdom School do something likewise?

What text would serve? Expediency carried the day. I had been planning to make multiple copies of William Segal’s powerful essay, “The Force of Attention,” a core text in the introductory Wisdom curriculum, but in my haste to get myself to Calgary, that detail had slipped through the crack. And so the idea emerged: the Scriptorium team would hand-copy the eleven-paragraph text and paste it up on the wall for all to share.

Betsy Young took over as the capable leader of the Scriptorium team. After the initial jitters around personal organizational and calligraphy skills, the way began to emerge, and the magical interplay between individual styles, inspiration, and synergy.

Some placed their attention on the calligrapher’s hand, with a variety of artistic visions and styles:

Soon illuminations began to appear, some distinctly medieval in feeling:

Others strikingly modern and abstract:

On the final day of Wisdom School, the nine individual “parchments” were collated and pasted to the solarium windows in the retreat center dining room. And for the first time the whole teaching was displayed for all to see, a seamless blending of medium and message.

Attention was our subject of study, and attention was the abundant harvest of our work together. We all understood in a powerful new way the depth dimension that comes into play when ink, pen, human hand and human synergy make themselves available to “take down” a spiritual teaching whose depth and power somehow deserves more than simply a computer screen and pecking fingers.

And thanks to Carolyn Herold, our Wisdom School photographer! 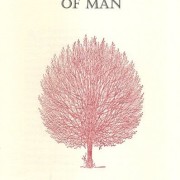 The Holy Trinity and the Law of Three: Discovering the Radical Truth at the...
Scroll to top