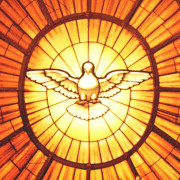 Seven years ago this month, Brother Roger, beloved founder of the Taizé Community, was slain during community prayer by a mentally disturbed assailant. He was ninety years old. The attack, witnessed by thousands of worshippers (many of them teenagers), shocked and saddened the world. But as the fuller pieces of the story began to percolate through—Roger’s radiant forgiveness of his assailant communicated in the final gestures of his human life, the outpouring of love and unity from the entire world at his memorial service, and his own often voiced yearning to devoting the final years of his life to entering more deeply into the Mystery of Christ— it began to come clear that there was a grace in all this, a voluntary election of the path of substituted love that made the light of Christ shine even more brightly in the darkness of human brokenness. As he had foreshadowed in the lyrics one of the most beautiful of the Taizé chants, “Dans nos obscurtités, allumez le feu qui ne s’éteint jamais:” In the heart of our darkness, you kindle the fire that never dies away. “

I was with Brother Roger in Taizé a few months before his death, but had not been back to the community since until this spring, as part of my sabbatical pilgrimage in France. In a way I was afraid to go, I guess. People had sent me photographs of Roger’s simple, flower-bedecked grave in the cemetery of the little village church he loved so well, but the finality of standing before it was not something I could easily bring myself to do. I feared as well for what I might find left of the Taizé Community. Would its bright spark have gone out, replaced by quiet disillusionment and habit? To lose such a powerful founder is traumatic under any circumstances, but under these circumstances, what could possibly remain? I guess if truth be told, I didn’t want to find out.

What I could not have possibly known as I drove up the familiar village road, was that I was about to have the most extraordinary encounter of my entire pilgrimage…perhaps even of my entire life. No sooner had I walked into the churchyard—late afternoon on what turns out to have been Roger’s birthday, May 12—the fireworks began. Immediately I could feel the energy surrounding the grave, radiant and quiet, and my own sadness. That caught me a bit unawares. I had not really realized the grief I had been carrying.

And then immediately that energy was transformed into an upwelling love, flowing out in waves, bathing everything in a radiant, electric light. My own beloved teacher, Rafe, was part of that love, as was, of course, Roger himself, and the unmistakable eucharistic presence of Christ, as palpable as at any communion table. I was galvanized, literally unable to move for what seemed like hours (it probably wasn’t, but the sun was considerably lower on the horizon when the energy field of paschal love finally released me from its grip.)

I kept being drawn back to that grave. I returned after mass the next morning and sat for maybe an additional hour. The words read in the epistle that morning kept ringing in my ear… “Tu seras tout en tous:” literally: “you shall be entirely in everything.” All shall be one, dynamically interpenetrating: the whole in the part and the part in the whole. Roger, Rafe, Jesus Christ, the entire conscious circle of humanity seemed to dance in the radiance of that spring morning.

Later, in conversation with one of the brothers, we talked about the state of the community and what it had been like to move through this tragedy. He admitted that somewhat to his surprise, the community seemed vital and on track; it had weathered the transition from Roger to its new leader, Fr. Alois, with an unexpected grace and ease. “It is as if we are being accompanied,” he reflected.

I kept my mouth shut. But inside, I was saying, “Right on, brother!” Taizé is being accompanied. Roger has not left his beloved Taizé; he has merely taken it to the next level. To the degree that the brothers—or whomever—can pick it up, attune to his Imaginal presence, to that degree the place will continue to be a force for reconciliation and mystical hope among the peoples of this earth.

Perhaps during Roger’s life Taizé could best be described as a Christian ashram: a spontaneous gathering of human hearts around a living saint. Now it is a Samadhi—a word used in the Hindu tradition to describe the grave of a still-living saint. It is not a “resting place” but a “thin place:” a place where the radiance, power, and love of a deeply attained conscious being flows back into this world like “dew which falls from above.”

And of course, for us Christians, this ought to be obvious. Are we not a resurrection faith? Do we not believe that personhood survives the dissolution of the physical body? On those magical days last spring, Brother Roger simply called me back once again to what I already know in my heart of hearts: that the life in Christ, fully and authentically lived, is neither disrupted nor weakened in death. As Roger himself loved to say, “What we dare not hope for, that is what he gives us.”

In the calendar of saints, one’s birthday is not the day of one’s physical arrival on this planet, but one’s day of departure from it, into the fullness of divine love. And so on this August 16, I will be saying, “Happy Birthday, Roger! May we rise to meet the love you still have to share with this world.

Unless You Are Not There