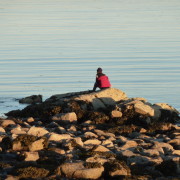 More on those “Four Voices”….  –   Blog post by Cynthia Bourgeault

In this continuation of my last post, I want to offer a couple of additional examples of my “Four Voices” method at work, along with some further reflections and a bit of fine-tuning. While the overall process tends to unfold along “Law of Three” ley lines, as described in my earlier post, every conversation turns up a slightly different alignment of the players and a slightly different way of weighing the evidence. Here are a couple of variations:

This is the situation I was alluding to in my interview with Terry Patten. The basic situation was as follows: For a number of winters, I’d been renting a sweet little mountain cabin on the shoulder of Mt. Sopris, one valley over from my beloved St. Benedict’s Monastery.  I’d sign on for anywhere from three to six months depending on that season’s teaching schedule at the Aspen Wisdom School, then depart for Maine sometime after Easter. There was no guarantee that the cabin would be awaiting me the following fall, but for six seasons it miraculously fell into place. Then in late summer 2011 my landlady announced that she needed to move the cabin to a year-round rental. She offered me first choice and a week to decide.

What should I do?  Having established the facts of the case—that I could (barely) afford the $1000 a month that she wanted for rent, but that having made that commitment, it would push me in the direction of a year-round commitment in Aspen, away from the Maine “base camp” where more serious writing and hermitting was beginning to unfold— I sat down with my four voices to listen more deeply to what they had to say:

Nafs: Go for it! It’s a once-in-a-lifetime opportunity to lock in a secure living situation at an affordable rate.

Soul: Yes! Yes! What a chance to finally be able to call this Snowmass Valley, country of my heart, “home.” To be close to all wild soul places of my life, and at the very epicenter of my journeying place in human space/time with Rafe.

Spirit: No. What part of “clinging” do you not understand? And haven’t you already been discerning that the Colorado work is winding down. Why suddenly reverse course?

Heart: No. As Rafe would say, this is “last year’s language.”  To take the bait is to betray the essence of what the two of us were all about, what he gave his life to teach me. Stay open; trust, and value the new becoming over the old bird-in-hand. The experiment continues.”

As in the “missing bag” conundrum of my previous post, the voices align themselves with Nafs diametrically opposing Spirit. Continuing the pattern from that post, Nafs is concerned primarily with security/survival: my ancient, primordial fear of being homeless, a cosmic “orphan.”  Soul, continuing to attune primarily to nostalgia and to the power of its meta-narrative, this time locks in solidly with Nafs, creating a very powerful coalition.  It is clear that Spirit has the more spacious perspective, but with the weight of both “Nafs-bleating” (thank you, Sioux, for that wonderful image!) and Soul-emoting martialed against it, there will be no psychic force available to follow through on the higher outcome.

Enter Heart, as before teased forth by a willingness to sit in the midst of the opposites without impatience or judgment.  And again, it manages to actualize “third force” by blending the higher (the spiritual principle at stake) with the lower (human fear and yearning) with a new “middle:” trust in the covenantal ground between myself and my spiritual teacher/partner, Rafe. There is spaciousness here, but now grounded in a very personal and empowering love which confers the inner force to ACT.

Often, it seems, “Heart” also seems to know, in an eerily clairvoyant way, what the next step in the unfoldment of what I call “my life” will be. In this case, not a week after the decision was taken to let the Colorado place go by, another opportunity suddenly presented itself, this time back in Maine.

Part of the urgency around the Colorado hermitage temptation was that access to my Eagle Island hermitage was becoming progressively more dicey as the boatman who had provided the only winter access moved gracefully but inexorably through his eighth decade on this planet. I knew I wanted to keep this special hermitage in my life, but how? With the temptation to lock in fulltime in Colorado overturned, I realized that what was really needed was some sort of mainland “base camp” close to Eagle but allowing me a more flexible and independent local access. But how?

I kid you not, a week after my reluctant signing off on the Colorado option, I was driving through Stonington, Maine, a picturesque little sea village that is essentially the mainland “staging platform” for my Eagle Island hermiting. I spotted a place for sale: barely affordable, I calculated, and surprisingly workable. Flying almost on automatic pilot, I put in an offer. Three days later, to my astonishment, the offer was accepted. And then the discernment began: Do I do this or not?

I should make explicit here, if I have not already, that the invitation to my four conspirators to weigh in follows after I’ve gone as far as I can with a logical process: establishing the facts of the situation and inviting reason to bring me as far as possible towards a “reasonable” solution. The conversation builds on top of that; it doesn’t pre-empt it. So reason had already established that I could probably afford the mortgage payments, and that the house, while needing work longterm, was essentially turn-key: I could move right in with no pressing immediate expenses.

That being said, I set up the usual grid and listened for the answers:

Nafs: OMG, no!!! What have I done??? The whole thing is going to cost over $250,000!!. How can I possibly afford it? Get me out of here!!! (And as if the message wasn’t clear enough, dream after dream of robber barons and going over a waterfall.)

Soul: Yes, I can see myself living here. A cool little town and a chance to pick up some underdeveloped threads of my life.

Spirit: No. Why do you need an additional house? The place on Eagle works well enough for the deepening of the hermit life. Play it out as long as it lasts, and then “into your hands I commend my Spirit…”

Heart: Yes. There is a developmental issue here. You’ve been living out of the orphan archetype way too long.  Spiritual freedom must build upon personal responsibility. Step up to the plate and take it on, even if it initially feels like going backwards.

This is a surprising (and a bit scary) configuration in that Nafs and Spirit are solidly in league. Only Soul opposes—and for not entirely articulate reasons. But as Heart comes online, it spots what Ken Wilber would call the “Pre/Trans” Fallacy behind the Spirit/Nafs coalition. Spirit is ultimately right, once again, but the non-attachment that emerges from agency achieved is very different from the non-attachment that comes from hiding behind an orphan archetype. Heart instantly spots the dysfunctional self-image (“chief feature,” Gurdjieff would call it) cowering behind the unassailable rectitude of Spirit and calls the question. And once again, it manages to wrest the power-of-action out of the hands of Nafs and place it at the service of the decision finally arrived at. I did buy the house, and so far I have no regrets.

In conclusion, I’d simply want to underscore a couple of aspects of this process:

My revered dervish teacher Murat Yagan frequently quipped, “Make you own self your homework and solve it.”  Happy homework!!

My Missing Bag as Spiritual Teacher