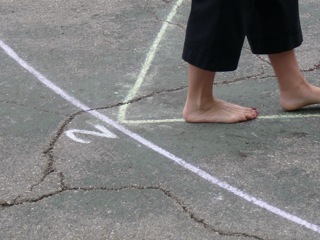 This post is based on a paper first presented at the Enneagram Conference with Helen Palmer in Cincinnati, Ohio, on October 5-6, 2013

From my many years in the Gurdjieff Work, I knew that the enneagram is primarily about lines of force (much more than about personality typing), and specifically, about the subtle but profound interaction of the Law of Seven and the Law of Three. I had long suspected that its secrets were more kinesthetic than cognitive, and as I prepared this past July for our inaugural Nine Gates Advanced Mystery School in Esoteric Christianity, I wanted our students to be able to taste this dimension directly.

The problem, however, is that while there are indeed specific enneagram studies among the repertory of Gurdjieff movements, they are advanced exercises, requiring considerable experience in the movements themselves, together with a mature understanding of the deeper meaning of this work. Far too much to be expected of beginners!

Was there another way of working with this challenge, however: of allowing the enneagram to “teach itself” from its own inherent kinesthetic wisdom? Here is how we engaged it during our week-long Mystery School at the Casa de Maria Retreat Center in Montecito, California.

Borrowing a leaf from Lauren Artress’ labyrinth book, we began by laying out an oversize enneagram, 50 feet in diameter, on the retreat center tennis court. The points were numbered and “solfeged” as in the diagram in Ouspensky, In Search of the Miraculous, p. 289 (reproduced in my book, The Holy Trinity and the Law of Three, p. 56).

We then established a walking path (or rather, three intertwined walking paths). The first path walked the circumference sequentially, along the path do-re-mi-x-fa-sol-x-la-si-do; a clockwise direction (“x” stands for the two conscious shocks at points 3 and 6 on the inner triangle). The second walked the “seven” line according to the well-established line of direction: 1-4-2-8-5-7 (this is the decimal generated when 1, the number of wholeness, is divided by 7. While we walked it, we chanted the tune created by the assigned musical intervals: “re-fa-mi-si-sol-la” (we created a lyric to accompany this: “Walk in love, infinite”).

What was the proper line of direction in the inner triangle? For guidance here our layout team relied on a wall hanging based on a diagram originating in one of the earliest presentations of the enneagram of personality (Riso/Hudson I believe), drawing the line of direction in the inner triangle as moving counterclockwise (9-6-3). The directional arrows were laid out on the tennis court indicating that direction.

In our debriefing session the next morning, a troubling pattern began to emerge. While most were okay with the experience, a few reported that it had felt “chaotic” and “disturbing,” and one (with some prior traumatic experience in a cult) even described it as “demonic.” As I headed out on my own during our lunch break to check out the reasons for this strong negative reaction, the cause quickly became apparent. Kinesthetically encountered, the enneagram creates a powerful clockwise vortex; turning counterclockwise to go from point 9 to 6 to 3 created a jarring countermotion that scrambled the energy field! As soon as the line of direction on the inner triangle was reversed, everything settled down.

When we tried it with the entire group later that afternoon, the results were dramatic. The whole enneagram, moving in the same clockwise direction, created such a powerful unified energy field that one could literally not move against it. People finishing their walk continued to move clockwise back to their seats at the edge of the tennis court, even though is some cases that required walking 270 degrees around the circle rather than taking the direct shortcut.

It also became possible, when we reversed the direction of the inner triangle, for people intersecting to meet and touch hands in graceful, flowing ways (not possible when inner and outer lines are moving in different directions). For many of our participants, those brief moments of encounter between the three and seven line were the most moving part of the entire exploration and left them with a powerful kinesthetic residue of understanding how 3 and 7 are always interweaving, a reality which remains imperceptible at a purely cognitive level.

I would have to say that for me personally the most powerful result of this experiment was to feel the hitherto unsuspected strength of the clockwise vortex contained within the enneagram. We were playing with dynamite here! No wonder some of the more sensitive souls in our group used the words “demonic” for our initial attempt to walk the enneagram “backwards.” One of the most notorious techniques of black magic is to recite sacred texts backwards or turn sacred symbols to mirror image. That is what we inadvertently did that first night.

First and foremost, I would want to re-emphasize the power of the enneagram as a kinesthetic force field, not merely a cognitive symbol. It leads one in; teaches from its own coherent field. Data acquired merely by cognitive or narrative speculation (as has tended to predominate in contemporary enneagram of personality schools) needs to be thoroughly ground-truthed in the core experience of walking the enneagram. In particular, the foundational stipulation that along the seven line one “progresses” (or “integrates”) against the line of direction (i.e., seven goes to five) and “regresses” (or “stresses”) with it (i.e., seven goes to one) may want to be reevaluated in the light of the emerging kinesthetic data. Since  the enneagram is quintessentially a kinesthetic teaching tool, all symbolic, esoteric, numerological, astrological, and pyschometric theories and para-theories need to be specifically validated in the moving sphere, allowing the enneagram itself to speak.

Second, there are bodies of information embedded within the enneagram that can ONLY be accessed through the kinesthetic portal: in particular, the core mystery of the enneagram itself (at least according to G.I. Gurdjieff): how the Law of Three and the Law of Seven actually intersect.

Our first enneagram walk took place in July 2013. Since that time, I have had a chance to repeat the experiment in October with members of our Advanced Wisdom School in Valley Crucis, North Carolina.  Here we laid the enneagram out “correctly” from the start, and the experience of the participants was unequivocally positive.

I will be deeply grateful to those who are my seniors in the Gurdjieff work (as well as my friends and mentors in the schools of Enneagram of Personality work) to comment on the validity of the experiment and to share any of your own work in progress here.

An Introduction to The Holy Trinity and the Law of Three