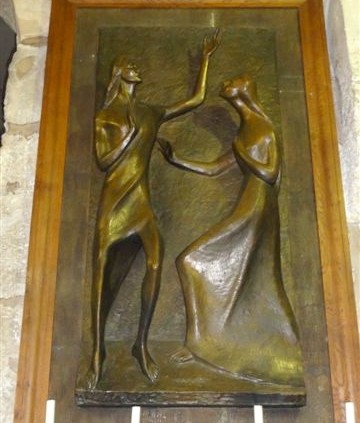 You know there’s a buzz out there when 100 emails come into your box all bearing identical links to the New York Times article responsible for the stir.I click on the link and voilà! There before me is a photo of a small papyrus fragment from the fourth century and distinguished Harvard scholar Karen King explaining how this recently recovered and certified authentic Coptic fragment unmistakably has Jesus referring to Mary Magdalene as “my wife.”

Wow! That should send another shock wave reverberating through the Vatican!

Now it’s true that journalism is skewed toward the sensational while scholarship is more skewed toward the cumulative. Karen King is a careful scholar and has done her homework carefully.  She knows—as all of us do that have worked in the field with any degree of due diligence—that the contentious issue of Jesus’s marital status is not going to rest decisively on one stray fragment of papyrus.

But what this new discovery does do is to provide additional confirmation for a body of evidence already mounting from those other recently discovered early Christian sacred texts—specifically, the Gospel of Thomas, the Gospel of Mary Magdalene, and the Gospel of Philip—that a group of very early Christians remember a version of their history quite different from what eventually became the officially sanctioned story. They remember that Jesus’s relationship with Mary was far more than just that of a teacher to a pious devotee or recovering prostitute. They remember that the relationship was spousal in nature, and that she was his designated lineage-bearer. This same message is conveyed, in much the same way in Thomas and in Mary, and Philip specifically refers to Mary Magdalene as Jesus’s koinonos, his “companion.”

It’s also right there hidden in plain sight in the four canonical gospels once you start looking more closely.  So this new fragment is not exactly building from scratch. It joins and further verifies a tradition whose authenticity has already been unquestionably established.

Sooner or later, the evidence trickling in from all quarters is going to be too overwhelming for all but the most obdurate traditionalists to ignore. I had already seen this coming when I wrote my The Meaning of Mary Magdalene in 2010. My real business in that book was not to argue the question of Mary Magdalene’s and Jesus’s relationship one way or another (I leave that to scholars such as King), but to help people try to get over the shock and sense of betrayal that this revelation so often leaves them with. Why has institutional Christianity become so invested in maintaining that Jesus has to be a celibate to be Jesus? That, it seems to me, is by far the more searching question.

And invested it has certainly become. Back in the 1990s when I was tending a small Episcopal Church in Colorado, I once asked a group of my parishoners, “How do you feel about the possibility of Jesus and Mary Magdalene having been married?” Without an instant’s hesitation their furious answers came tumbling out: “But if Jesus had had sexual relations with a woman, he couldn’t have been the Son of God; he would have been impure. “ “If he loved one person in particular, he couldn’t have loved us all impartially.”  What in heaven’s name does that tell us about our own understanding of human sexuality, human love, and conscious partnership as a path to universal compassion? No wonder our churches are so defiled with sexual misconduct and cover-up scandals: our anthropology of human intimacy is still in the gutter.

And yes, the same old rhetoric has already come out in the rebuttals that are already peppering the internet. “Jesus is the only and eternal son of God who will come again to judge the living and the dead,” one irate Christian fulminated—obviously assuming that this unique divine status entails celibacy as part of the package.

But if he were to look more closely at that final court of appeals for issues of early Church doctrinal orthodoxy—i.e., the Nicene Creed—he would see that nowhere in the creed does it specify as an article of belief that Jesus is a celibate, or that his divine status depends on his presumed celibacy. This is all later Christian midrash, the product of an increasingly patriarchal and misogynist hierarchy which for the past sixteen hundred years has conducted its theological discourse in the hallowed halls of celibates speaking to other celibates. Not only does it not reflect the authentic message that Jesus is teaching; it actively distorts this message.

Karen King’s discovery is another small drop in the bucket, but the water that is beginning to collect there from so many different small steams is indeed living water. We are finally getting to the root of the problem.

*This article originally appeared in the Washington Post blog On Faith.

Where the Rubber Hits the Road
Scroll to top