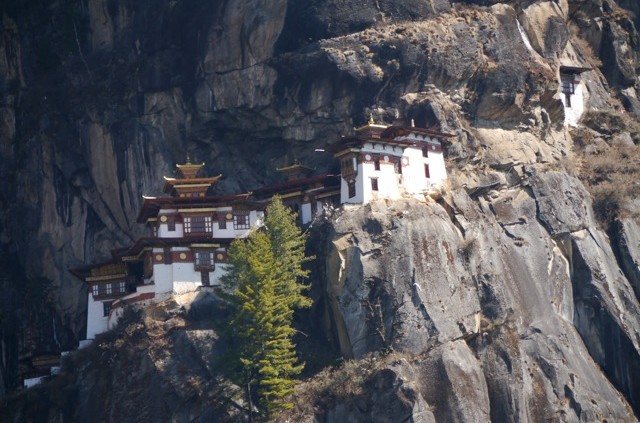 The following post from Cynthia includes pictures by Cynthia and Gwen (http://gwenborg.wordpress.com/)

The first inkling that a Bhutan pilgrimage might be headed my way arrived circuitously, through an email forwarded on to me from the Contemplative Society:

Greetings. I wanted to write again, this time at the suggestion of Fr Thomas Keating. I wrote you a couple of years ago to enquire whether you had any interest in the possibility of visiting Bhutan with a small party of other serious Christian practitioners (none yet decided), to have an informal interchange with the meditation masters in Bhutan, and ponder formation in the contemplative and liturgical life. I have found much in their current practices that might spark something. A monk-friend /meditation instructor who is ‘secretary general’ of their central monastic body has offered to facilitate such an interchange if Christians emerge who are interested.  (I’m an Anglican worker-priest and economist, and work in Bhutan among other places).

The sender of this email identified herself as Sabina Alkire— a name that didn’t initially ring any bells with me. But Bhutan itself has long exerted a strong hold on my imagination: a fabled, pristine kingdom high in the Himalayas, largely closed to tourists till only a decade ago, where ”Gross National Happiness” was deemed more important than “Gross National Product.” With instant certainty I knew I was “in” and wrote back at once to tell her so.

Little by little the other players filled in. I immediately recruited my daughter Gwen, who’d similarly been feeling the Bhutan pull (though admittedly more with an eye to trekking than to Interspiritual dialogue.) Gwen quickly set me straight on who Sabina Alkire was. Our self-described “Anglican worker-priest” turned out to be   one of the most impressive younger economists of our times, protégé of Nobel prize winning economist Amartya Sen, and at age 45 running her own Institute at Oxford University. Her groundbreaking Multidimensional Poverty Index has been revolutionizing the way governments think about poverty and largely accounts for  her well-established, high-level connections in Bhutan. Her equally extraordinary understatement around this not insignificant detail set the tone for our entire trip.

Gwen’s background in International Relations shared significant overlaps with Sabina’s, and one of the blessings of trip for me was to watch these two articulate, spiritually intelligent and globally aware younger women discover that they had much in common.  While Gwen saw herself self-deprecatingly as “tagging along after Mom,” she quickly carved out her niche as trip photographer and archivist, as well as taking our group dynamics in hand with her signature  graciousness and common sense.  You’ll find her excellent, detailed account of our trip at http://gwenborg.wordpress.com/

At sixty-six, I was the oldest member of our group: a new experience for me and quite a rite of passage! Rounding out our entourage were my old friend and colleague Pip Nicholls from New Zealand; Erik Keeney, a sometime student of mine and voracious spiritual seeker finishing up a degree at Naropa University; and Fr. Oswin Gartside, a wise and gentle Anglican monk from Yorkshire.

Whatever hopes and expectations our hosts may have had riding on this invitation were never fully revealed. Basically, the project seems to have been the joint inspiration of Sabina and her well-matched colleague Lopen Gembo Dorji, Secretary General of the Bhutan Central Monastic Body. In a Buddhist country now teetering giddily on the edge of Westernization, the Monastic Body finds itself in the ticklish position of being called upon to guide the transition while simultaneously upholding traditional spiritual values. If it is to remain a significant player in Bhutan’s rapidly shifting economic scene, Gembo had been reasoning, the Monastic Sangha must emerge from its traditional isolationism and move toward a much more proactive engagement with the contemporary world. Part of that engagement, he intuited, included a new openness to dialogue and collaboration with other religious traditions, particularly likeminded Christians.

Our impromptu group of Christian seekers found itself as the pilot project.

As if to dramatically up the ante on the whole exchange, shortly before we arrived, it was announced within the Monastic Sangha that the Venerable 68th Sangha Raj, ninety years old and Gembo’s beloved teacher and guru, had agreed to offer a very rare spiritual teaching, a once in a lifetime opportunity. The starting date directly conflicted with our visit, and by this point travel documents, logistics, and itinerary had all been  cast in stone.  At whatever the inner cost, Gembo stepped up to the plate and took the hit. As his monastic confreres packed their bedrolls to head off to the teaching, he was waiting open-hearted to greet our little delegation at the Paro airport. Throughout the entire visit his graciousness and equanimity never flagged.

What ensued was a dharma tour beyond belief! During our ten days as official guests of the Central Monastic Body of Bhutan, we had private audiences with monastic and political leaders (including the director of the Institute for Bhutan Studies, and three of the five Eminences who direct the affairs of the Central Monastic Body.) We were given an insider’s tour of monastic schools, temples, and sacred sites. We participated in a Mahakalya ritual, complete with drums and those soul-rending long horns. We were treated to exquisite meals, over-the-top Bhutanese hospitality, and above all, the indefatigable presence of Gembo as our 24/7 guide and spiritual mentor.

quality of being together emerged that was artlessly pure and spontaneous, without self-importance, posturing, or ulterior motives.  The sincerity and transparency of our intentions shined forth particularly brightly in the deep mutuality of our informal exchanges (which often went on till well into the night, fueled by endless cups of tea.) The high points of the journey, for me, were a riveting audience with the Vice Sangha Raj of the Monastic Body, who bathed us all in successive waves of love as he officially tied our karma to his, and a quiet Sunday Eucharist offered in a farmhouse high in the Himalayas in which two red-robed Buddhist monks participated fully.  Whether these acts have any follow-up in the temporal sequence, they stand as their own absolute moments, each bearing its plenitude of meaning.

Three weeks later, I am still dreaming of stupas and prayer flags. It’s still far too early to sort through the dense interweave of impressions and insights, but I can certainly say that that instantaneous “yes” that reverberated through my being when I first received the invitation was not disappointed.  On simply the physical level, the stunning beauty of the country and its people is a ray of hope for our planet— all the more so because this beauty is being maintained not simply by physical isolation but by conscious choice. Whether the fragile coalition of monks and political visionaries will ultimately be able to hold the line here remains to be seen (I’ve got my fingers crossed!), but at this juncture the balance seems to be working, and an upbeat, confident young nation is striding forth to see if it can create a different kind of future for our planet.

Above all, I come home renewed in my commitment to spiritual practice. It’s really about all I can do to express my solidarity with the stream in which whatever was born during our visit now flows. If our little delegation had filled up its ranks with spiritual movers and shakers, I suppose by now we’d already have the follow-up plan in place: the conferences, colloquia, fellowships, and website to turn the eyes of the Christian world more directly toward the remarkable spiritual experiment now underway in Bhutan. I still don’t know whether that was an unstated goal in the original invitation; if so, the experiment can only be written off as a well-intended but costly failure. Given the crew that ultimately signed on for the project, it probably ain’t gonna happen.

But practice we know about. It is the ground we met on and the common heart that sustained us as we collectively ventured more deeply into that mysterious terrain of the Spirit. And to the extent that each one of us seemed to have arrived independently at the conviction that right action falls out of sincerity of intent, I suspect that this profoundly pure and singular encounter will undoubtedly hold some surprises in store for all of us as it finds its own way of bearing fruit.

I come home from Bhutan feeling a bit like one of those bewondered peasants in the movie Babette’s Feast, freshly arisen from a banquet table whose over-the-top grace I can neither repay nor even fully fathom. About the best I can do at this point is to gather with my fellow pilgrims around the well and join hands in a clumsy dance of thanksgiving. I have been fed, nourished, sustained, and reinvigorated by that gift that calls forth the best in all human hearts: selfless compassion and generosity.  To Gembo, Sabina, Lam, Nangyel, Cheki, and all who supported us on this remarkable adventure, my heartfelt thanks. As I receive it in humble gratitude, may it shape me to its measure.